The Wallpaper is a continually expanding cross border project. Programme destinations for the exhibitions are local, national international and connects directly with the European Dimension project. This validates the importance of local contributions to a wider European experience.

The second North West Citizens Wallpaper incorporates some wallpaper sections from the small British “Fountain” community living beneath Derry’s walls, alongside several colourful displays about aspects of Donegal life from Bundoran to Carndonagh.

In experiencing more and more of “This is Us” within our communities via visual and social connections, the Citizens Wallpaper project will contribute to the familiarity of diversity within contemporary society.


La Tene promotes peace and enjoyment of others cultures.


The Belfast Community Relations Council  is supporting La Tene in Ireland with its organisers Apac Northern Ireland, The Bookham theatre group Devon and Stichting Arts & Education Netherlands.
Practitioners and participants from a mix of resident communities,  join representatives from British and Irish communities for a day of interactive workshops;  to be  followed with an evening of cultural music, performance and storytelling exchanges.

The evening is based around the ancient Celtic tradition of Gatherings where groups from various parts gathered at specific sites to celebrate others and their diversity. This was common practise all over Celtic Europe.  La Tene, in present day Switzerland was an important centre for this culture.

The event also includes a visual exhibition about Europe’s recent past and the contemporary issues now facing it. It presents Europe’s transformation as a journey from a troubled divided continent towards a wider and inclusive society. People, places and events reflect this journey.  La Tene Gatherings will reflect a small example of its destination.

The Citizens Wallpaper is a project working with local people to create their View on Their World. It creates a visual exhibition by local people about their lives and community. The results are shared with society at local and national venues.

The brown bull of Ulster returned this weekend to Carlingford village in the Cooley Mountains. There he met up with a friend from the Maramures area of north Transylvania for a Gathering. Joined by musicians from Armagh, Derry , Devon and Co Louth the pair exchanged cultural information and toured the village singing and dancing.

The meeting was part of a programme launched by local community groups from both sides of the border. "La Tene" project, named after an ancient Celtic site in Switzerland, hosted Romanian, Hungarian, Polish, Bulgarian and Dutch nationals to a day of folklore, storytelling, music and performance.

"La Tene",s European Dimensions appealed to traditional tastes and was well received in streets, bars and cafes as Lambeg drums from Derry played alongside Armagh Bodhrans,Devon fiddles and Carlingford flutes to the pleasure of local people and their visitors to the historic area. 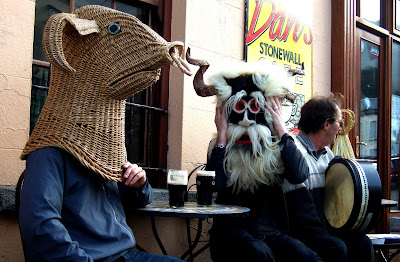 The brown bull of Cooley from the legend of the Tain shares a pint of Guinness with the “Vilfaim” from Maramures Transylvania during a La Tene Gathering in Carlingford 2011. It was the first time the "Vilfaim" who represents the emotions of the ancient Dacians had a drop of the black stuff.

future generations, 59-year-old Noel Butler, an Aboriginal elder from the Budawang people in New South Wales, Australia, has travelled 16,000 km today to the gate of Auschwitz 11-Birkenau to perform the first ever Aboriginal healing ceremony, 65 years after the camp's liberation.

Organised by An Tairseach, a UK culture & media group, the event is part of a European tour for Noel Butler to places of suffering and tragedy. Travelling from from Ulladulla NSW, he is visiting Krakow and Belfast, connecting the world's oldest culture with memories of the recent past while helping with healing and renewal.

"I have come from my people to your people," Butler said to a representative from the Museum. "And I hope I can help and together we can move on with the memory of those who died."

In a recent interview with the Krakow Post, the museum's director, Dr. Piotr Cywiński, said, "We need to secure the situation for future generations where we understand the importance of Auschwitz-Birkenau as a place where we should all meet. Birkenau is a colossal grave. Everyone takes care of the graves of their ancestors and it is only natural that such sites are taken care of to become more meaningful in helping young people understand the place.”

Noel Butler has worked with his organisation Jamanee Gunya for over 20 years, working with young people and educating them on Aboriginal culture.  http://www.krakowpost.com/article/1308