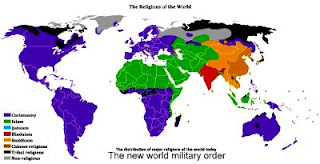 One might be forgiven, by looking at this map, that Christians are on a wining ticket towards what the American military terms "full spectrum dominance" in the world. Whereas globalisation in trade and industry may be just a modern name for something that has always been around, the multi polar military outlook will reflect the colours above. Christians maybe fragmented in their love for one another.....Russia, South America, Cuba, Latin Europe, and Africa are hardly praising the actions of the "Alliance states," but China and India are solid in religion, language and national identity. Both are armed, lean and willing to defend their geo political interests. After the oil shock of 1973, we children were told in school to prepare for war with the Muslims over oil.....Thankfully this never materialised as they strengthened their financial defenses. A multi-polar world is much more favourable to the aspirations of Christianity, two generations removed from the most horrific crimes in the history of humankind.
Posted by Martin Nangle at 14:58