Is Nato preparing a new Barbarossa 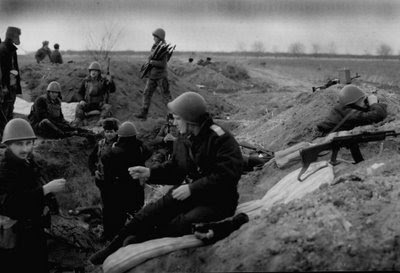 "Old Europe" and "new Europe" agree on a tough line on Russia ---- at least for now.

After a summit lasting just four hours, Nicolas Sarkozy -currently in charge of the EU rotating presidency - announced that Europe was united.

the summit conclusions strongly condemn Russia's "disproportionate reaction" in Georgia, describe as "unacceptable" its recognition of the independence of South Ossetia and Abkhazia and call on other states "not to recognise this proclaimed independence".

Mr Putin accused the Western press of an "immoral and dishonest account of what happened".

And he went on to dismiss out of hand European criticism of Russian force as "disproportionate".

"What did you want us to do? Wave our penknives in the air and wipe the bloody snot off our noses?" he asked, adding: "When an aggressor comes into your territory, you need to punch him in the face - an aggressor needs to punished."

"God forbid that we should tread on US toes in its backyard," he said, expressing frustration that the United States seemed to think it was all right to arm Georgia on Russia's border - a move which he repeatedly argued had provoked Georgia to take up military action.