Martin Nangle: Salisbury Exhibition. The Citizens Wallpaper and The Search for the Golden Lion.


Of all the Gallery joints in all the towns in all the World, that Russian spy Sergei Skripal and his daughter Yulia had to walk into the pizza place next door to my exhibition spot at Gallery 4 Salisbury library on till April 30th 2018.
Come and enjoy my exhibition if you are about. We don't serve Novichok -just old fashioned English beer.
So here's looking at a good show. 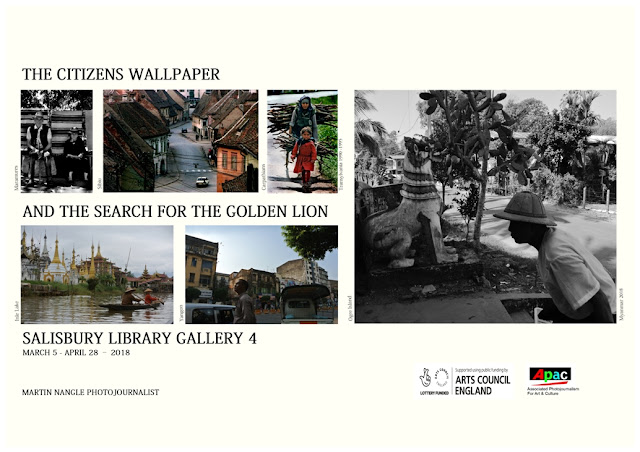 The Citizens Wallpaper and The Search for the Golden Lion brings together photojournalism from 1990s Transylvania and 2018 Myanmar/Burma, with excerpts from the Citizens Wallpaper project. What unites this contrasting material is a focus on ordinary people and their lives. The whole exhibition demonstrates how photojournalism can assist local communities in creating their own artistic visual representations.

MARTIN NANGLE* Photojournalist
Martin Nangle is an award - winning photojournalist. During the Northern Ireland conflict from 1977 – 1989 he worked for national and international media. After his assignment to cover the fall of the Berlin Wall he was seconded to Associated Press London bureau to work in Europe and the Middle East. Locations included Jerusalem, Damascus, Kuwait, Iraq, Cairo and later the Balkans. He documented culture and society during the early years of post-Communism and the secessionist Wars in Yugoslavia. He recently returned from Myanmar/Burma where he recorded daily life against the background of civil conflict.