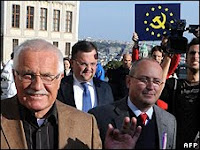 President Vaclav Klaus (left) announced saturday Oct 3 2009 that after the Irish yes vote on the now infamous Lisbon treaty, "there will never be another referendum in Europe". He was then asked whether he had a message for Britain. "I am afraid," he replied, "that the people of Britain should have been doing something really much earlier and not just now............,"


In ten short years since negotiations began on the treaty, the Union everyone wanted and still wants to be part of, has become the biggest Euro story since the fall of the Berlin wall exactly twenty years ago next month.
Posted by Martin Nangle at 18:41